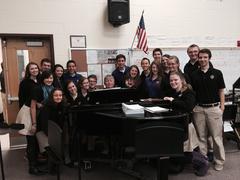 After graduation John is appointed a music teacher and choirmaster at Iona College, a grade 5-12 catholic boys school in Brisbane, Australia.

In the first year, he organizes the Ionian Chorale, and gives the Australian premier of Louis Vierne’s Messe Solennelle, in St John’s Cathedral, Brisbane.

The following year that choir performs all the major Messiah choruses accompanied by a semi-professional standard community orchestra.

In the third year the Queensland Conservatorium, Griffith University, Brass and Percussion Ensemble is enlisted, to accompany some of the items-which are all standard cathedral repertory.

This notion of conducting a high school choir doing major choral works in collaboration with external musical organizations at the community, university and eventually professional level, sets a new and to date unmatched precedent in Australia.

The Ionian Chorale receives many accolades – and invitations – session singers for local recording artists – invitations to be the resident choir for things like a Cathedral centenary celebration, and the annual trades service in St. John's Anglican Cathedral, Brisbane.

The following year, John accepts the position of Director of Music at Hillbrook Anglican School – a position he holds for 13 years. The school was three years old and had no music department to speak of.

During this time he continues his unique practice of conducting his high school choir doing orchestral accompanied choral works in public concerts in major venues. These include –The Rutter Requiem and Magnificat (with professional orchestra) The Vivaldi Gloria and Magnificat, Handel’s Ode to St Cecilia Day and Zadok the Priest, and Lully’s Te Deum.

During this time he makes significant strides in the development of the overall music program, involving a 1/3 of the student body in 12 ensembles, an instrumental and vocal instructional pull-out program, overseeing a music department staff of 11 teachers, the design of a performing arts center, and touring performing groups internationally. Geoff Newton, the Principal of Hillbrook, describes this as “an outstanding achievement”.

On arriving in America, John makes several technological innovations in his first assignment in the Georgetown School District in South Carolina. Dr. Susan Matthews, Georgetown Middle School Arts Chair said “I found him to be an excellent musician, with a real concern for the full music education of his students. He takes care to impart to his students… the spirit of the music and the joy of making it.”

After a brief visit to a community High School in rural Iowa, John takes up his next assignment in Noblesville Indiana at Guerin Catholic High School. Here he develops VoyceworX, an un-auditioned vocal group made up of mostly IB music students. Music examples of their work can be found on this webpage.

Former student and VoyceworX member Maggie says "Your influence over the last three years, has changed my life" - in many ways that encapsulates John's career as a "music missionary".